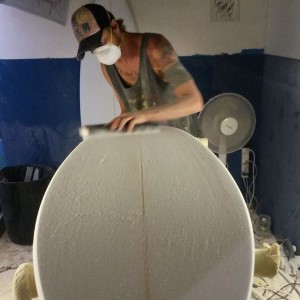 Buzzy Joell is the owner of the business “The Board Box”. “The Board Box” was just recently opened and they do repairs and custom artworks on all types of boards. They also sell some surfing hand goods and just recently installed a 25 sq. meter infinity wall (still studio) to rent out to photographers. The idea of his business comes from his father’s saying “find a job you love and you will never work a day in your life!” They feature a full band practice room, a quarter pipe, a flip bank, a chill area where you can watch surf and skate videos, uncapped wireless internet connection and an unlimited supply of hot coffee! His ultimate goal is to come up with something unique in Cape Town, some creative space with super friendly, relaxed but professional ambiance.

He was born in the UK and at the age of 4 transferred to Durban. He spent his High School years in Jozi, then moved down to Stellies where he completed his studies and discovered surfing. Eventually, he settled in Cape Town where he has done a fair bit of missioning around. “Cape Town for me, is the ultimate city, we have pretty much everything and I love to live an outdoor lifestyle”, he explains. “Great surf, amazing climbing, some insane hills to bomb on skateboards, great hiking, sandboarding, snowboarding (occasionally), some great golf courses, and of course the night life!”, he added. To name a few of the bands he has seen in Cape Town – Rudimentals, The Little Kings, Mind Assault, Fuzigish, Half Prince, The Hogs, LP Show and Crimson House Blues.

He’s been lucky to have visited a lot of wonderful places around the world, but one of the best places is Namibia which he loves, it represents wide empty spaces for him and comes with insane waves. Not to mention that there’s an infinite supply of beer and jager there. “Or maybe it’s just coz my lady is Namibian and I’m a tad biased, hahaha!”, he laughed.

Over the last few years, he’s been working with some well-known local shapers like Robby at Vudu Surf, Dean Geraghty, and Dutchie. It was Robby that gave him the chance to spray boards and from that steered him on the path to where he is today. It was also Robby that introduced him to Dutchie and Dean. “It’s been really great to see 3 very different facets of the surf industry and I have learned some very different lessons through each of the guys I have worked for/with”, he says. From the lessons he learned with these 3 awesome guys, he squashed these all into a single idea and luckily for him, the business has encapsulated all the things he loves to do.

He has done a lot of artwork and his favorite is the Black label Longboard which he created for a dude a few years ago. “I don’t really think I have a favorite but it’s always rad to see the boards I’ve sprayed when I’m out surfing”, he explains.

Playing with paint and getting to meet and interact with people are what makes his job most enjoyable. He has a wonderful business partner, they successfully handle the entire operation along with their staff working all the front of house administration as well as advertising. “I also have 2 great guys that work with me, Steven and Wedge, and they are also an integral part of “The Board Box”, Buzzy says. When it comes to surfing, he does a lot compared to the people that work normal office hours. He can skip off during the day to surf and then try to make up the hours he missed during the evening, an advantage of being the owner.

Buzzy started bodyboarding as a grom and only got into surfing about 12 years ago. Growing up in JHB, it was hard for him to take surfing seriously as he only went to the coast once every couple of months, but he played a lot of golf in JHB. “I have vague memories of my first proper wave, but I can replay my first barrel in my head like it was in the session I had this morning. It’s buried solidly into my memory”, he remembers.

He loves to ride different boards. He owns a 5’11” performance board and he has a collection of other boards such as the Glen D’arcy Sea Flight twinny – it’s about 5’6” or so and 21” wide. He easily gets bored riding on the same type of boards so he always surfs with many different boards as possible.

His favorite spot locally is the West Coast. “I can’t really pick one specific spot coz there are so many, it’s a rad place to just mission with mates and there are always empty line ups to be found”, he says. Internationally, Indo was sick but the crowds are busy. “There are still to many places I wanna go surf so for now, I’m just going to stick to Die Wes Kus”’ he added.

When talking about the people he met through surfing, Buzzy has a lot of names to mention. All of them had a big influence on him. Kidders, Aids, the Home, Goofrey, Squatter, Juzzie, Boyes, Wedgie, Dutchie – to name a few. “My girlfriend surfs as well – which is EPIC!”, he exclaimed.

For him, surfing is what he loves to do. It really influenced him in one way or another, affecting every major decisions of his life. It’s like hanging out with his best mates on the beach, be it in the local shores or on a surf trip. “Good friends, good times, and awesome surf!”, he says with joy.

When given a chance to change one thing about surfing, it would be something like making it compulsory for everybody to pick up at least one piece of trash in the beach after every surf session. It’s like saying “thank you” to nature for providing everything. It does not take a lot of time but it can make a big difference to the beaches all around the world.

Finally, he loves to go on a Drive-thru mission with Benji, Pat O, Noodles, Donovan, Mike Lossness and the rest of the crew. “I know that’s more than one surfer and it’s more than one day, but those dudes just look like they have such a jol”, he says. “I guess it would be my ultimate road trip”, he added.

Check out the Board Box’s Facebook feed in the sidebar and pop over there and give them a like, or better yet visit them in real life.