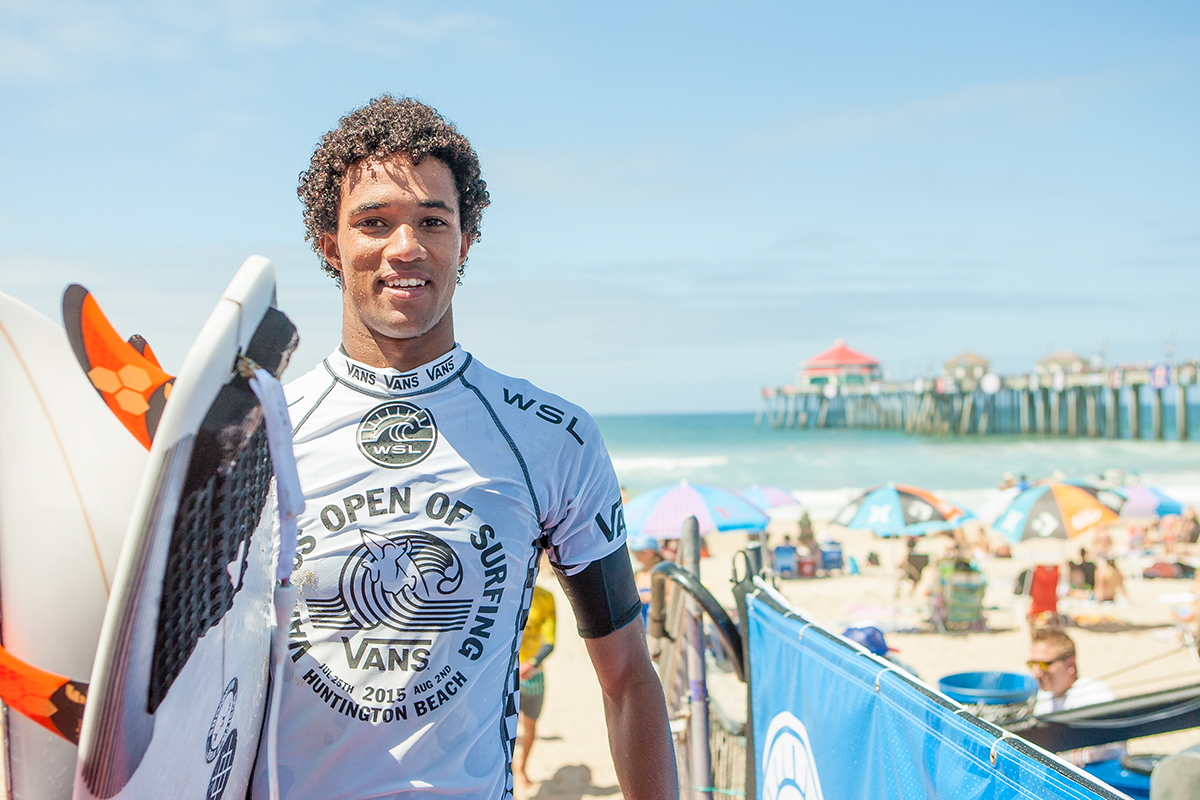 Turn the clock back to Apartheid days, and Michael February would not have been able to showcase his amazing talent to the world. His dad, Isaac February, was not allowed to surf at many of the best surfing spots around the country.

Even after 1994, Isaac still had a tough time being taken serious as a black surfer. He had to deal with heckling and taunts on a regular basis. 15 years after the big political shift, Michael followed in his dad’s footsteps, competing and winning a surf contest at the same spot where his dad had struggled to surf in peace.

Isaac knew that this was no small feat, his son would change the South African surfing scene for good. Michael February’s inclusion in the Championship Tour, is inspirational to all black surfers dreaming of surfing alongside the big names in the surfing world.

Michael was born in 1993, a year before the big political shift. Growing up in Woodstock in the 90’s was a whole different ballgame. Today the suburb has a hipster vibe, but back in the day it was much rougher around the edges.

Michael fell in love with surfing at age 10, and shortly thereafter his parents decided to move to Kommetjie. It’s a wave-rich small town about 45 minutes from Cape Town. His carefree free-range style soon caught the eyes of judges in local surfing competitions, he steadily climbed the South African ranks. By 2012 he started entering the Qualifying Series events in other countries as well. Three years later, he made it to the 2015 Martinique Final.

By 2016 he was riding the international waves with flair, winning third place at the Azores Airline Pro. The next year was his big break, finishing third at the Ballito Pro and fifth at the US Open of Surfing. The big QS 10 000 results were followed by three QS 1 000 wins at home. He finished one spot below the qualifying cut-off end of 2017. But this meant that he still held the first injury-replacement spot for the upcoming season.

Then early 2018 Mick Fanning decided the Rip Curl Pro at Bells would be the last event he participated in. Suddenly Michael’s status changed to full-time Championship Tour surfer. He is one of eight rookies in the competition mix. Michael February is already a crowd favourite, his artistic flair wows both fans and peers. Who could resist that confident smile? He is truly an ambassador for his community, carrying hope with him wherever he goes.

The Wildcard is On a Roll

He had a great run on the World Surf League’s South African circuit, making it all the way to the Ballito Pro Semi-Finals. Michael beat Jesse Mendes in the Quarterfinal 1, securing his spot in the semi-final.

The feisty surfer managed to win three of the South African QS events. He surfed circles around his competitors at the Nelson Mandela Bay Surf Pro, Corona Durban Surf Pro and the Vans Surf Pro Classic. He was also the runner-up at the Buffalo City Surf Pro. He’s climbed to No. 4 on the Qualifying Series rankings, up by 17 spots.

The winning streak secured him the wildcard slot at the Corona Open J-Bay. The WSL Commissioner’s office sat up and took notice, offering him the slot at the Championship Tour event in South Africa. He now has the chance to again challenge World No. 3 Jordy Smith, who eliminated Michael in the Ballito semi-finals.

Eye on The Prize

Michael sees the third-place result in a Qualifying Series (QS) 10 000 event as the game-changer moment he’s wanted for a long time. He has grown as a competitive surfer throughout 2017, inspiring his fans with his performances during the Ballito Pro.

He is entering the upcoming season on a high looking forward to pushing himself at the US Open, the European leg, and finally Hawaii. Jordy and Michael are on good footing, the surfing veteran offering the wildcard some encouraging words after their surfing stand-off. Jordy Smith went on to win the Ballito Pro.

The showdown between Michael February and Jesse Mendes was also an exhilarating moment for the wildcard. After catching some ruler-edged waves, he managed to outshine the goofy-footer, to make it through to the Ballito Pro semi-finals.

Born to Conquer the Waves

Michael had a great start before entering the competitive surfing world. His father encouraged him from a young age to experiment with surfing and he had great access to quality waves in Kommetjie, Cape Town.

He’s the full package with an inspiring air game, a solid rail-approach, plus numerous man-hacks up his sleeve. Conquering the wild waves of Kommetjie as a child has made him fearless, never backing down from a challenge, tackling the big surf head-on. Michael February has all the winning ingredients for a very successful career as a professional surfer.

His level-headed approach to contest rules and his great heat strategy, will take him far on the premier tour. Michael’s equal 3rd place in Ballito Pro presented by Billabong, is a sign of greater things to come during the rest of the World Surf League 2018 Season. He’s not scared to try high-risk moves and he can’t resist pulling off air moves at every chance that pops up. It’s a great strategy – d big moves mean heat and contest wins are much more likely.