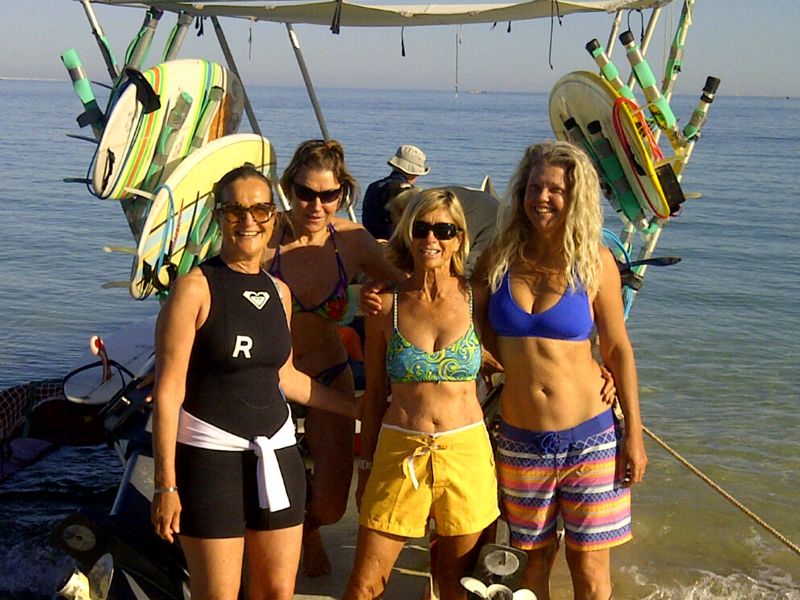 Bernie Shelly is one of Cape Town’s true surfing legends and who would have thought that she is a 65 years old surfer and a Grandma of six potential surfers. Aside from her husband, Alan, surfing is one of the determining elements of her life’s course. Although she didn’t surf for 25 years, stopped travelling and became a mother of 4, she didn’t quit and started surfing again in the early 90’s at the time long boards made a good comeback. She underwent a bilateral hip surgery 3 years ago, but that didn’t keep her out of the water and she continues to surf, compete and travel if given a chance.

She has competed most of her life. And just like other surfers she won some and she lost some. One of her greatest achievements was winning WP Champs in the Ladies category and adding 2nd, 3rd and 4th may times. Just lately a new category was formed for women above 35 – men have 5 year progressions. “In the older age division I have come out tops most times in WP Champs”, she revealed. She always ended up being runner up or at least being in the finals of SA Longboard champs and finally won the Diva division. Since the day she had her hip replacements, she became more reticent and careful. Imagine the thought of breaking your leg bones or dislocating your prosthesis; it’s a big deterrent to willful abandon.

Right now, her life revolves around her menagerie and family, but a lot still centers around surfing. She stopped teaching Psychology and English and dabbled a bit with writing for a while, but eventually became an enthusiast surfer. “Everyday, my waking thoughts involve tides, swell and wind”, she says. That’s how fanatic she was and even her holidays still get planned around surf spots (except of course for ski holidays). The majority of her clothes are simple and picked with the need to change in car-parks always kept in the mind. Any invitations will be declined or accepted depending upon her surf schedule.

She’s traveled a lot both locally and internationally, including St Francis, Jbay, Durban and Elands Bay as well as Mozambique, The Maldives and Madagascar. ( Read about her travels to Madagascar here ) For her, almost all the places she’s been to are second to Cape Town. “If it wasn’t for the damned South-easter and icy water this would be paradise, what with our bountiful, diverse coastline, multitude of surfbreaks of varied competency levels and types of waves, and our natural beauty”, she expressed.

Her bucket list includes surfing with only bikini bottoms on, no top – just plain freedom to surf. And she added, “the soul afraid of dying never learns to live”. However the cold water prevents her from doing so and thus she needs some warm private spot to do semi-naked surfing.

Apart from surfing, Bernie enjoys hiking, skiing, viewing nature in all its forms, spending time with friends or family and also her animals (two cats, four bantams and three golden retrievers). She also loves indigenous organic gardening, going to the cinema and movies, watching ballets, bicycling, pilates exercises, playing music and reading great books. And above all, dreaming about surfing.

Her present board is a David Stubbs 9ft epoxy performance longboard having a thruster set up but she is now experimenting with a bigger sole fin. Just lately she purchased a Bulldog from Natural Curve in Durban. This is like a 6’8″ longboard having a number of feet cut in the middle. “The rationale is that it’s a transition towards a short board, so that my surfing can be more versatile, but I doubt I’ll go shorter, so Winston will be my “short” board.” she says. “I’m into mellow head high surf, although I must acknowledge that an occasional adrenaline rush from a fast hollow (but makeable on a longboard) wave is very welcome.” she added.

Talking about her favorite surfing spot, there happens to be a super “secret” peeling wave around the West coast of Cape Town which is quickly becoming her favourite local spot. Not to mention the additional appeal of being not so crowded. Of course let’s not ignore the beauty of Muizenberg on a great day as among the best longboard waves in existence. Moreover, she loves the Hullett’s reef in St Francis Bay. “When it’s big the left is fast and exciting; when it is small, the right is fun. And it is almost always warm”, she remarked. More so, she finds the Bali’s Medewi to be amazing and ideal for longboards. “I’ve been barreled at Uluwatu (believe it or not) and the thrill of a hollow wave is undeniably orgasmic, but for me nothing surpasses the charm of a clean mellow running longboardable wave” she says.

Her expert advice on how to keep peace in the ocean (surfers, bodyboarders, SUPers are all combating the waves), all she can say is that, “there is an inexhaustible supply of waves, so if you don’t get your fair share today, you’ll get them on another occasion”. And besides, there’s nothing you can do about hogs and other idiots in water, so it’s wise to ignore them and just enjoy the waves that comes to you.

Like the other avid surfers, surfing influences every major decision in her life. Surfing dictates everything, whether she is available to baby-sit the grandchildren, what car to drive, how much money she has to spend, where would she go on a holiday – absolutely everything! After all, surfing is her passion, her sweet obsession, her remedy, her personality, and also her reality.

She met a lot of extraordinary women and men through surfing. One of those is Simone Robb, whose talent became her inspiration. Another one is her good friend Therese, who’s extremely addicted to fitness that keeps her from getting slouchy. And of course John Mc Carthy and Justin Bing, who taught her how to become a soul surfer and a motivated achiever.

“What’s to change when it’s the perfect lifestyle, perfect sport, and perfect way of living?”, these words are her answers when she was asked about one thing to change about surfing. What’s important for her is today and to have exciting plans for the future. Just recently, she met up with an old surf friend from the 60’s and with one more survivor of the “Seal Surf Club” days, and together they plan to bring back the erstwhile girls’ surf club. And if you are to ask her for what purpose, she would say, “Just for the stoke of it”. Also, she is preparing one more trip that requires a plane ride and someplace warm with bigger waves for next winter. Not to mention she wants to visit Mozambique the coming year during cyclone season.

In regards to the famous surfer she would like to kick back with for a day, she did not mention any names. All she says was, “Perhaps someone who is cool and fun and easy to be with.” “I would choose the person more for her/his qualities as a person than her ability to surf well,” she added.